Hot on the Trail of Compulsive Brand Squatters | WhoisXML API

Hot on the Trail of Compulsive Brand Squatters — The Complete Research

Note: Check our webcast “Hot on the Trail of Compulsive Brand Squatters” for an overview of the results discussed in this report as well as related discussions by our security researchers.

Domain brand squatters refer to individuals or entities who register domain names resembling those of legitimate companies. These domains are commonly known as “look-alike domains” or “typosquatting domains.”

Brand squatters may have several tricks up their sleeves, including the sale of counterfeit products and the execution of phishing and malware campaigns. In this research, we are primarily interested in brand squatting activities that could lead or may have already led to phishing campaigns.

We collected more than 13,000 typosquatting domains registered within two days and categorized them into roughly 2,400 groups. These domains satisfy two requirements that hint at bulk registration—they closely resemble one another and were registered on the same day. Then for a period of 14 days from the day after their registered date, we checked daily if the domains were detected by major malware engines.

Below are our key findings:

Using files from the Typosquatting Data Feed for 11–12 July 2021, we ran an experiment to identify how many of the sample typosquatting domains were dubbed “dangerous” over time using Domain Malware Check API.

The initial sample consisted of 7,285 domains for 11 July and 5,867 domains for 12 July. They were classified into groups of different sizes, as per the mechanics of the Typosquatting Data Feed (i.e., identifying groups of similar-looking domains registered on the same day).

Then for 14 days from the time they appeared in the Typosquatting Data Feed, we ran the domains via Domain Malware Check API daily and documented the results in this paper. The rationale for this was that an increasing number of domains would logically be found “dangerous” at least once over time.

As previously mentioned, this paper focuses on the notion that certain groups of typosquatting domains were probably used in malicious campaigns, hence the use of Domain Malware Check API. We did a three-part analysis of the data set:

We listed the number of domains flagged “dangerous” at least once within the two-week period in the following tables:

Table 1: Number of typosquatting domains identified on 11 July 2021 that were flagged “dangerous” at least once over time and other relevant statistics

Table 2: Number of typosquatting domains identified on 12 July 2021 that were flagged “dangerous” at least once over time and other relevant statistics

The aggregated information from Tables 1 and 2 are summed up below.

Table 3: Number of typosquatting domains identified on 11–12 July 2021 that were flagged “dangerous” at least once over time and other relevant statistics 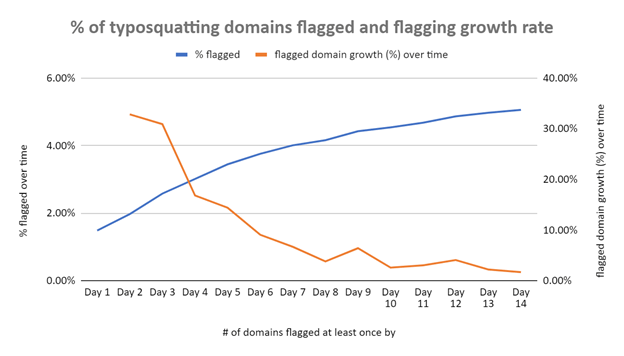 Figure 1: Number of typosquatting domains identified on 11–12 July 2021 that were flagged “dangerous” at least once over time.

As noted earlier, the Typosquatting Data Feed detects groups of similar-looking domains that could be indicative of malicious behavior. Here is an example of a group found in the 11 July file: 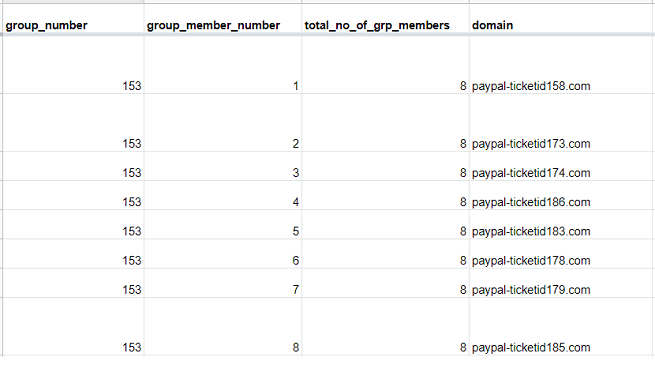 Figure 2: Typosquatting group identified on 11 July for the string “paypal-ticket”

As shown in greater detail later on, this group contains domains that malware engines have flagged “malicious.” For instance, paypal-ticketid158[.]com was still dubbed as such at the time of writing: 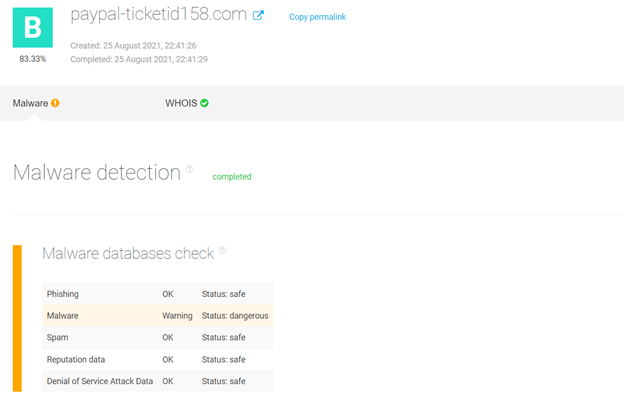 However, not every domain in this group was initially found dangerous, even if each contained the “paypal-ticketid” string.

A potential explanation for this is that threat actors may have decided to use the domains gradually. They could have found it convenient to register a pool of domains to execute campaigns faster. In other words, they may have used only a few domains at the onset of their attack. If the first set of domains gets blocked, they could switch to another set they already own and have ready for action.

This possible explanation raises the question of whether it would be wise to monitor or block entire groups of typosquatting domains upfront, even if only one or a few of their members are found “dangerous.” Assuming this premise is sound, we could look at other sets of statistics at the group level.

For 11–12 July, 1,296 and 1,136 groups of similar domains were identified, respectively. Table 4 and Figure 4 shows the number of groups with at least one member flagged “dangerous” over time for both dates.

Table 4: Number of typosquatting groups identified on 11–12 July 2021 that were flagged “dangerous” at least once over time and other relevant statistics 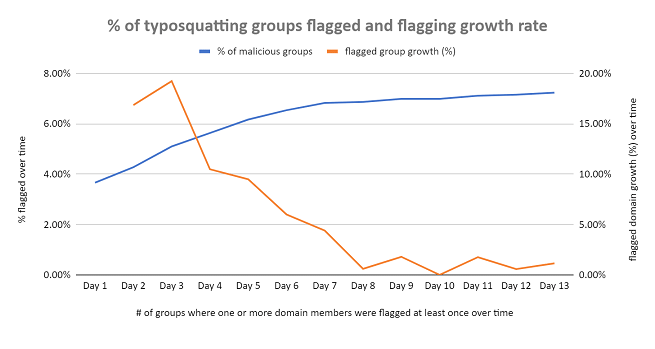 Figure 4: Number of typosquatting domain groups identified on 11–12 July 2021 that were flagged “malicious” at least once over time

Should We Monitor Typosquatting Domains by Group?

When we compare the percentage of malicious domains against that of typosquatting groups with at least one domain flagged “dangerous,” we see a relatively wide gap, as reflected in Figure 5. 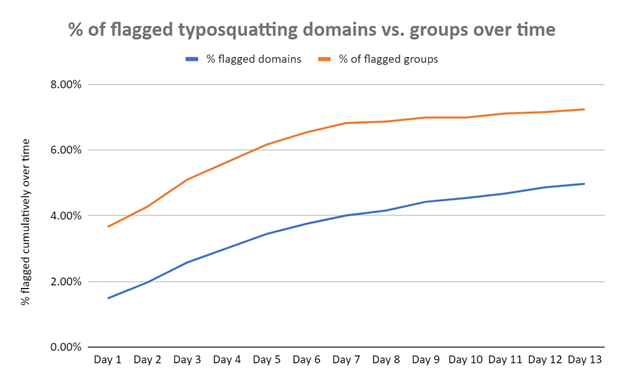 Figure 5: Percentage of typosquatting domains versus groups flagged “dangerous” at least once over time from the 11–12 July feed files

This gap exists notably due to the fact that typosquatting groups contain one or more suspicious members that may have been “missed” by traditional malware engines as per the example shown below.

Now, considering the complete sample of 13,154 domains and 2,432 groups for the same analysis, we identified hundreds of suspicious and potentially “missed” domains over the course of two weeks. Table 5 shows the exact figures for the two days.

Table 5: Number of domains that could be considered suspicious for belonging to a typosquatting group with at least one malicious domain

We cited a typosquatting group earlier that contains the “paypal-ticketid” string. This group comprises eight domains, four of which were flagged “dangerous” every day for three days, as shown in Figure 7. 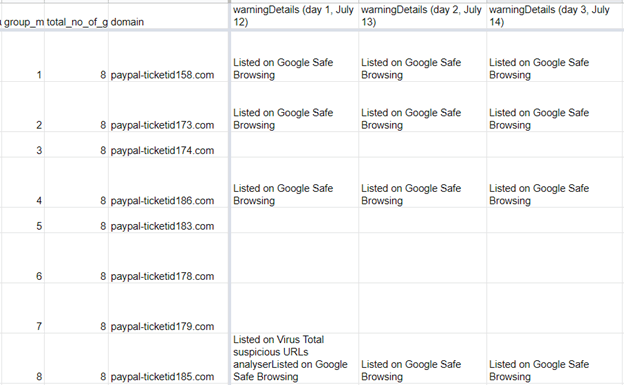 The latest WHOIS records of the domains appear to have the same registrant name and Hotmail email address (which we have kept hidden for privacy but uses the format “firstname.lastname[.]@hotmail[.]com”). The domains also have “BigRock Solutions” as the registrar name.

Figure 8: Registrant and registrar information of the “paypal-ticketid” domains

Aside from sharing the same registrant and registrar details, these domains also had matching creation, update, and expiration dates and IP addresses. 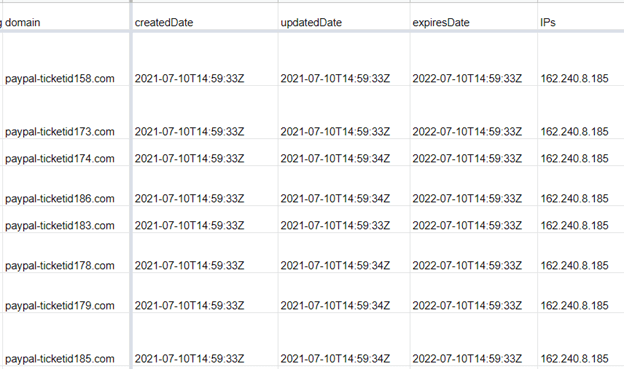 Even though we saw marked connections between the identified domain names, not all of them were dubbed “dangerous” from day 1 as shown in Table 6.

Looking at other domains found in the 11 July file, another group caught our attention because it somewhat looked similar to the “paypal-ticketid” domains. However, this second group repetitively used the string “chase-ticketid.” 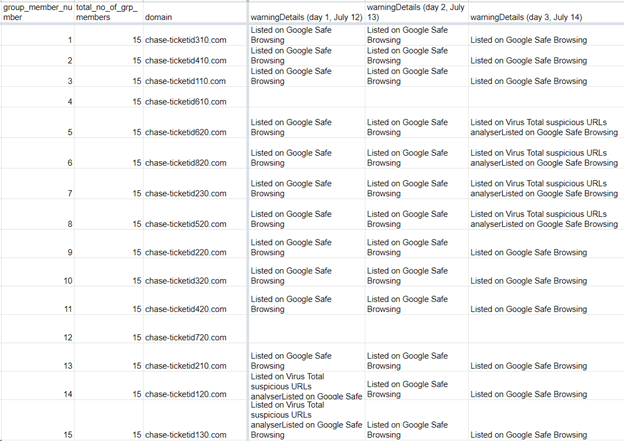 Note that this group has also been heavily flagged “malicious.” As of the first day of monitoring, 13 out of 15 domains were already marked as such.

Since the strings “paypal-ticketid” and “chase-ticketid” look similar (i.e., both had “tickedid” as a substring and used a popular brand name), it seemed interesting to check if a more profound connection exists between them. To check, we compared their WHOIS registration details.

First off, let’s look at their registrant details. 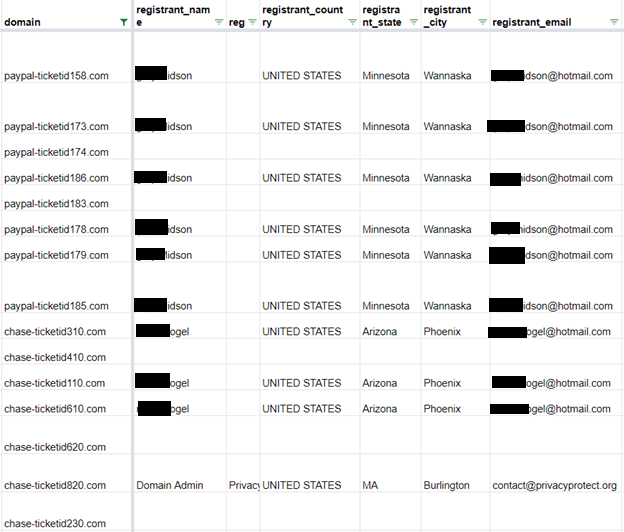 Besides the fact that the groups were from the same feed file (11 July), we also noticed that:

Second, looking at registrar and server information, we can see that this data is identical for the two groups. 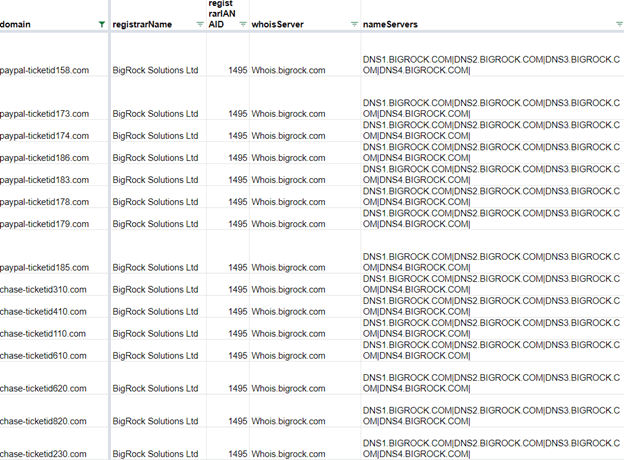 Other data points, such as the status and creation, update, and expiration dates, are also the same for both groups. 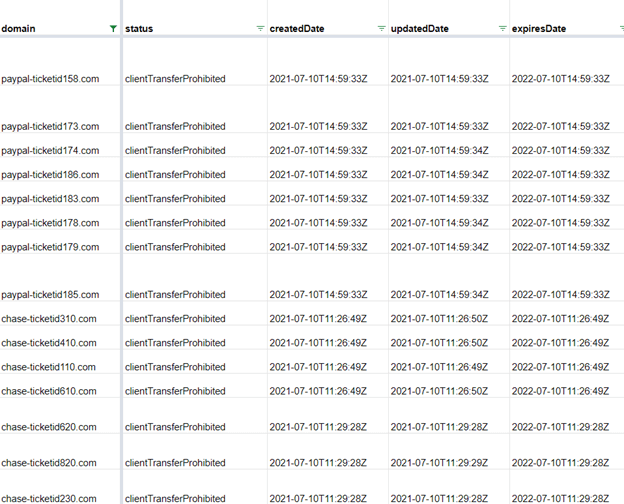 Figure 13: Other WHOIS data points for the “chase-ticketid” and “paypal-ticketid” domains

Overall, there is a good chance that the same person or group could be behind the registration of the “chase-ticketid” and “paypal-ticketid” domains. Also, keep in mind that we are only looking at one day’s worth of typosquatting domain data. Who knows how many other branded “ticket-id” domains may have been registered over time? With that in mind, we proceeded to a more in-depth discovery analysis.

For instance, for the string “paypal-ticketid,” we found 1,122 domains. Compared to our eight initial domains in the 11 July typosquatting data feed, we discovered 140 times more potentially connected domains. 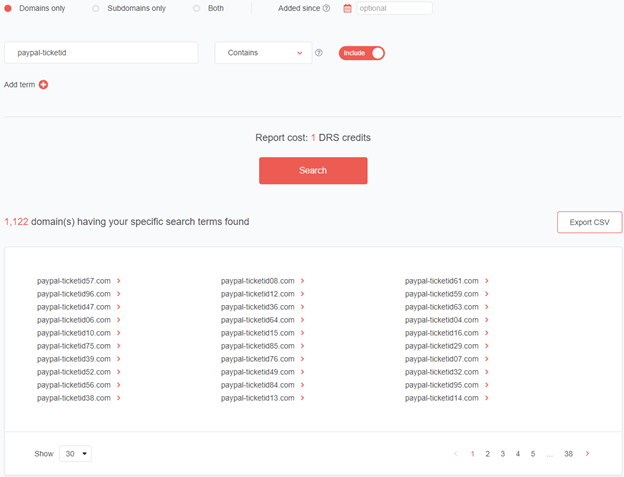 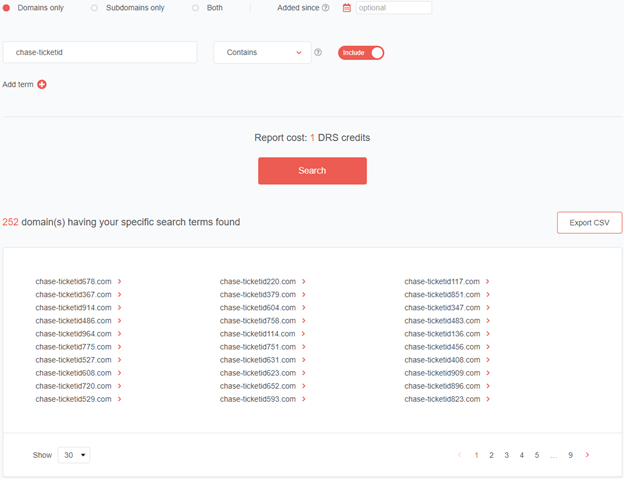 Broadening the analysis, it’s also possible to query only the “-ticketid” string to see if other brands appear. Doing so gave us a total of 1,652 domains or an additional 278 domains. 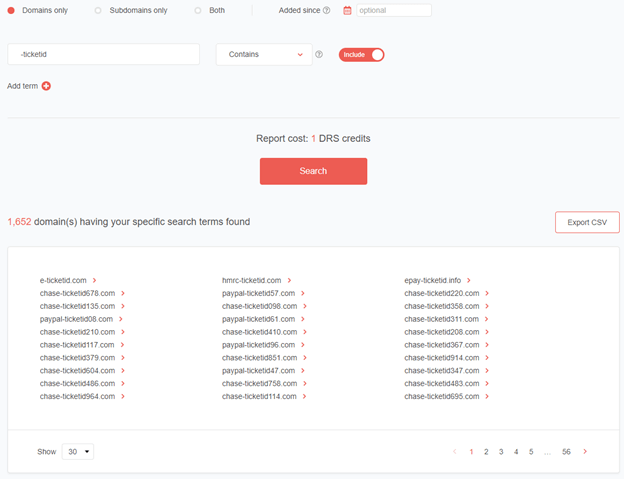 While using this shorter string is more prone to the inclusion of more false positives, going through the long list helped us identify other domains with different string variations, such as “chase01-ticketid,” “chase02-ticketid,” and “chase03-ticketid.” 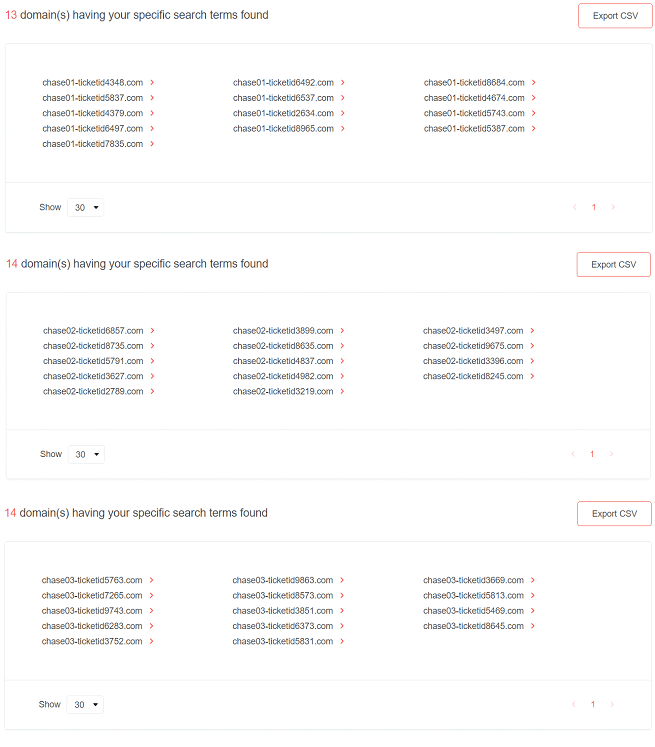 Examples of the additional results are “paypalabuse-ticketid” and “paypalaccess-ticketid” domains. 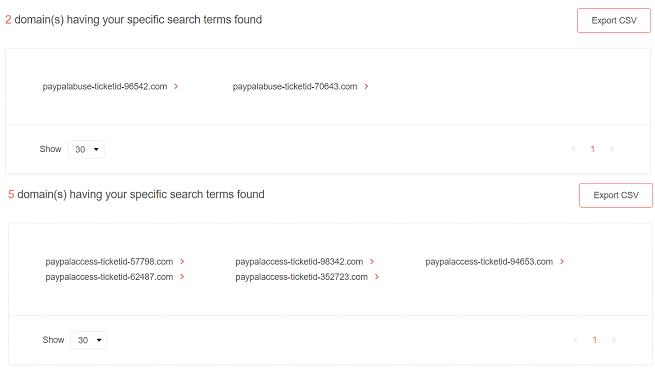 While we already identified a significantly larger campaign footprint, from 23 to 1,652 domains or 71 times the initial number of clues obtained from the Typosquatting Data Feed, it was interesting to determine if we could establish sufficient connections between the initial and expanded groups.

To do that, we did a bulk WHOIS lookup of the 1,652 domains. That gave us 307 domains with current WHOIS records. The significant discrepancy between 307 and 1,652 could be due to the speed at which the domains on our list are being taken down. Many of the “-ticketid” domains from the 11 July feed were flagged “dangerous” shortly after detection.

That said, for the 307 domains with current WHOIS records, we found that:

The actors behind brand squatting could be identified by analyzing WHOIS records, though there is a good chance the recorded public details we identified were aliases of some sort. Still, our analysis of the PayPal and Chase typosquatting domains and registration patterns hint at the same person or group behind their registration.

More significantly, the brand squatters identified in this research may have decided to progressively put their registered domains to work. In fact, some typosquatting domains were immediately flagged “malicious” by traditional malware engines while others in groups of bulk-registered domains may be missed for a few days until they become active.

With that in mind, it could be beneficial to consider typosquatting domain groups registered on the same day as early-warning indicators of phishing or malicious activity where one group member has been flagged as dangerous.